State Express Transport Corporation (Tamil Nadu) (formerly known as Thiruvalluvar Transport Corporation) is a state-owned transport corporation that runs long distance mofussil services exceeding 300 km and above throughout the state of Tamil Nadu and major cities in adjoining states of Andhra Pradesh, Karnataka, Kerala and the union territory of Puduchery.

A separate entity exclusively for operating long distance express services was conceived by the Government of Tamil Nadu in 1975 and the services were transferred to the newly formed express wing of Pallavan Transport Corporation with effect from 15 September 1975. It was registered formally on 14 January 1980 and renamed as Thiruvalluvar Transport Corporation (TTC) in honor of Tamil poet Thiruvalluvar. During 1990s, JJTC was formed which operated interstate routes of erstwhile TTC. JJTC was then renamed as RGTC in 1996. Both TTC and RGTC was later merged into State express transport corporation (SETC) in 1997. 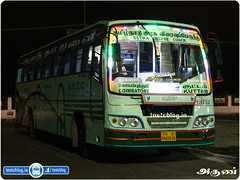