Pick pockets and those generally disposed to creating trouble on Metropolitan Transport Corporation buses will do well to mend their ways. All their actions that went unnoticed will henceforth be caught on surveillance cameras. Besieged by complaints about how unsafe travel in buses had become, MTC has decided to act. Closed-circuit television (CCTV) cameras have been fitted in 10 buses on routes 6D (Thiruvanmiyur Tollgate), 29C (Thiruvanmiyur-Perambur), 23C (Thiruvanmiyur-Ayanavaram), 45B (Guindy Industrial Estate Anna Square) and 15B (Broadway-CMBT). Three buses on the 15B route, two on routes 23C, 29C and 6D and one bus on route 45B have each been fitted with four cameras -one behind the driver, one each on front and back doors and one on the front left side, a senior MTC officer said. The routes selected, said another officer, were considered problematic, with more passengers travelling on the footboard than inside, leading to frequent accidents.

Mainly , he said, a large number of educational institutions were located along the routes that these buses traversed and the students used these services in large numbers throughout the year. Whenever a problem arises, the buses become convenient targets of the students’ ire, said the official said.Installing the cameras is expected to enhance safety for both passengers and MTC crew. Until now those who harassed the passengers, particularly women and children, went-scot free as few complained and there was little officials could do.They also found it difficult to nab students who hurled stones at buses or damaged the seats as the offenders got off en route.Now, armed with evidence of the offence the officials can easily nab the culprits, he said.

There have also been several complaints from passengers about the inappropriate behaviour of MTC crew, with many saying they have been abused and in some cases even manhandled by the conductors and drivers. Now no one can escape as the CCTV footage will help nail the real culprit, the crew or the passengers, said the official. The cameras were fitted on buses on the five routes about a week ago and are being operated on a trial basis, said a senior MTC official. At the end of every day, the recordings will be scrutinized and the data stored. “Very soon we plan to make it a live monitoring service by installing cameras in buses on more routes across the city,“ he said. 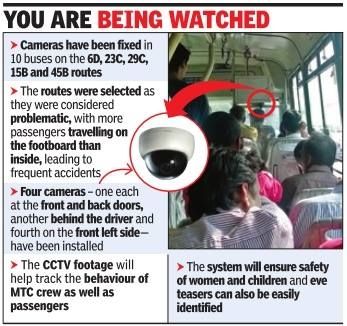