Adi Perukku (July-August), Maha Shivarathri in Vaikasi (May-June), Navarathri in Purattasi (September-October), Karthikai Deepam in November-December, Annabishekam and Tirvadhirai in Margazhi (December-January) are the festival celebrated here. In olden days, the temple area was an agricultural land. Once, when a farmer ploughed the land, he found blood oozing out Surprisingly, he found a Shivalinga. Pujas began to the Lord. The scar caused by the plough injury is still visible on the head part of the Shivalinga. The construction of the shrine is such that a devotee could enjoy the darshan of Lord Arappaleeswarar, Mother Thayammai, Lord Vinayaka and Lord Muruga standing from a single spot. The temple is open from 7.00 a.m. to 1.00 p.m. and 2.30 p.m. to 7.00 p.m. During the festival days, the temple is open from 6.00 a.m. to 10.00 p.m. There are shrines in the inner corridor of the temple for Lord Muruga with his consorts Valli and Deivanai, Lord Vinayaka, Lord Kasi Viswanathar, Visalakshi, Lakshmi, Saraswathi, Dakshinamurthy, Chandikeswara, Durga, Kalabhairava, Sun and Moon. Devotees seeking child boon, removal of obstacles in marriage talks and brilliance in education pray to the Lord in the temple. Devotees perform abhishek and offer clothing to Lord and Mother.

The beauty of Kollimalai is the sum total beauty of nature clothed by hills spanning a distance of fourteen miles far and wide with a proud history dating back to 2,500 years. It is “Kollipavai” that has crowned the fame of the region. Kollipavai is a most beautiful feminine form created by a divine sculptor to create lust in the minds of the demons who came down to Kollimalai with evil designs. Kollimalai has the reputation of being ruled by the Chera kings. One of them, Valvil Ori was known for his charitable and compassionate traits. He was also a great warrior capable of defeating an elephant, deer, wild pig and such other animals with a single arrow. A part of the region ruled by him was known as Arappalli.

As Lord Shiva graces this place as a Swayambumurthy, Arappaleeswarar temple came into being here. There is a statue for Valvil Ori here. The temple is praised in the Thevaram hymns of Saint Ganasambandar and Saint Thirunavukkarasar as Araipalli. Devotees use to feed the fishes in the Panchanadhi river and use to do nose-boring to them. Due to ignorance, a devotee caught the fishes and began to cook them for food. When the curry began to boil, live fishes began to jump and run. Symbolizing this incident, the Lord is praised as Arapaleeswarar who joined the cut fishes by the devotee.

Arapaleeswarar Temple is situated in an area called Valapur Nadu. The Lord graces the devotees along with Mother Thayammai, Lord Vinayaka and Lord Muruga. The devotee can have the darshan of the Gods standing at one place in the temple. The carvings around the temple bear the history of the visit of Sembiyan Mahadevi, the great grandmother of Rajaraja Chola and wife of Sivagnana Gandaraditya Chola and her gift of invaluable jewels to the Lord. Enjoying a pleasure bath in the falls and the darshan of the Lord in the temple devotees become healthier both physically and spiritually.

There are five ever permanent rivers on the northern side of the temple, the falls of which look like flower showers from a height of 150 feet. They bring rare medicinal properties from the plants around the hills. There are plenty of fishes in the rivers. Devotees believe that Arapaleeswarar is in the form of a fish. Therefore, they offer food to the fishes in the people before entering the temple. Rivers are flowing here even when there would be no rain. They are never dry. The Adi Perukku is celebrated with all gaiety on 17, 18 and 19 of Adi month-July August. The tribals in the region join the devotees in celebrating Adiperukku in their own traditional ways. They catch the fishes, bore their nose and leave them back in the river again. These rivers flow from Kollimalai through Turayur, Musiri and join the Cauvery. 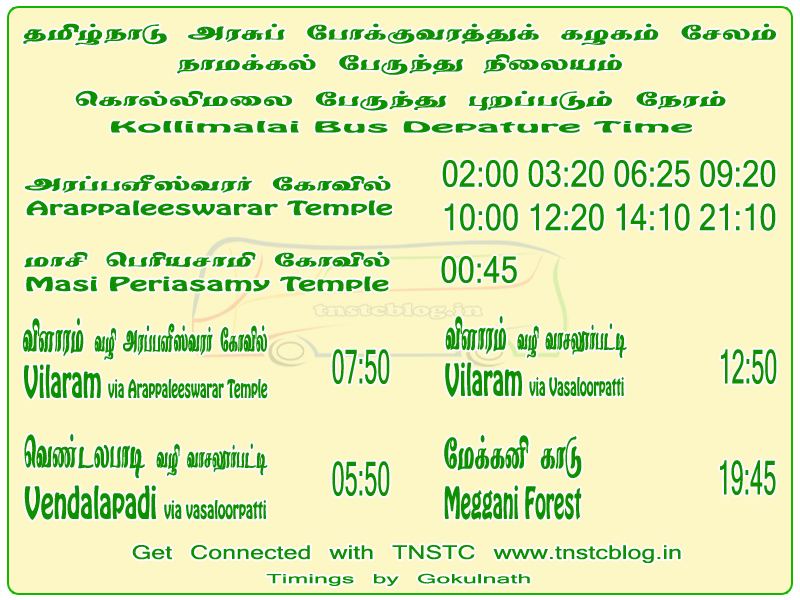