During our visit to chennai on last week Me and Sree took TN-74N-1719 3×2 Seater from Madurai to chennai., A mind blowing Journey on our Beloved TNSTC., This 3×2 Seater was started before Pongal season and flagged off by MLA., the first bus to spot by Sree was TN-74N-1725 at Perungulathur he was overexcited and started to Message everyone through Social media’s we were in hunt of the Newbie who was offering the low cost fare for the benefit of Public., First to click him was Nagaraja.M sir in CMBT, with prior permission from him took his pics and posted an article about this service in our TNSTC Blog to benefit public, there was an overwhelming response from the public and there were good positive reviews on this service., once again sree spotted this service in MIBT at 10:30 P.M. towards Chennai, so we waited with an excitement to board the bus. A timeline review of the Journey we had on it.

we were at MIBT Mattuthavani roaming around the counters of SETC and looking for a bus, a final decision was made to take this 3×2 Seater and was waiting at the entrance of the MIBT, asusual Private agents who canvas Passenger came and asked sir chennai chennai only 350/- AC service Nonstop blah blah….. We calmly waited for our Hero to enter, after a good 45 Minutes arrived correctly on time into MIBT at 10:15P.M. there was no crowd towards chennai but in a hurry we rushed towards the door, and got our favourite seat next to front entrance on left side. first time seeing the bus in real, the bus was neatly maintained from exterior and looked like a new bus and after boarding in itself took the tickets from Madurai Rs 280/- was fare, then took a look at the interiors it was also maintained neatly thanks to our public too for keeping the seats neat, after seeing the conductor Sree was happy that he had travelled with him in TN-74N-1600 BPR once to Nagercoil, bus moved into Chennai Bay and waited to pick Passengers there were some pax waiting for this bus. conductor and co driver started to pick passenger was eager to fill the seats for the long journey, as the crowd was low slowly moved out of bay and passed through city Bus bay and picked some pax for Trichy too and started at 10:40 P.M. from MIBT, the great Plus in this bus is the fully closed front door. After conductor issued tickets to other pax we started our convo with him, and showed the pics of their bus and the article we have posted in blog., the crews were happy to hear this and said we need public support like this then only any service can be successfull.

A sharp 2hrs 05 mins journey we reached Trichy central a smooth sedate driving the bus was superb it floated in roads and pax bound to trichy got down and asusual we waited in Choked Que and conductor again started to pick pax and did his duty some pax came willingly and boarded the bus., Then came the great nuisance a ticket canvasar and a conductor from Wandhawasi Depot started to shout at our conductor and there was buses struck on traffic in front of us, but their aim was to move this bus out, then started to abuse with very worst words and this is not fair in a public place, they are not doing their duties and started abusing., then enquired with the conductor he told about the difficulties in operating this service and the problems they are facing daily in Madurai and Trichy. slowly started to move out of the Trichy CBS at 01:00 A.M and reached NH in another 10 mins, slowly reached Samayapuram toll and stopped 10 mins for bio break and Driver changed Second Driver took the wheels.

The second Driver who took the wheels started to push the bus a little more than first, but a steady driving no harsh break or horn in the entire Journey, reached Villupuram at 03:40 A.M., 2hrs 40 min from Trichy CBS to Villupuram NonStop, a good crowd got down from bus there is a regular Pax for Villupuram bound and in return also from Villupuram there is a crowd for this bus. after dropping pax bus started to move in other 3 mins and at 04:05 A.M. reached Canteen before Kurinchipadi Toll and bio break lasted for 10 minutes, when we took pic of the bus a pax raised as a compliant to the crews they are taking pics of your bus. 04:15 A.M. started from canteen and cruised on NH. 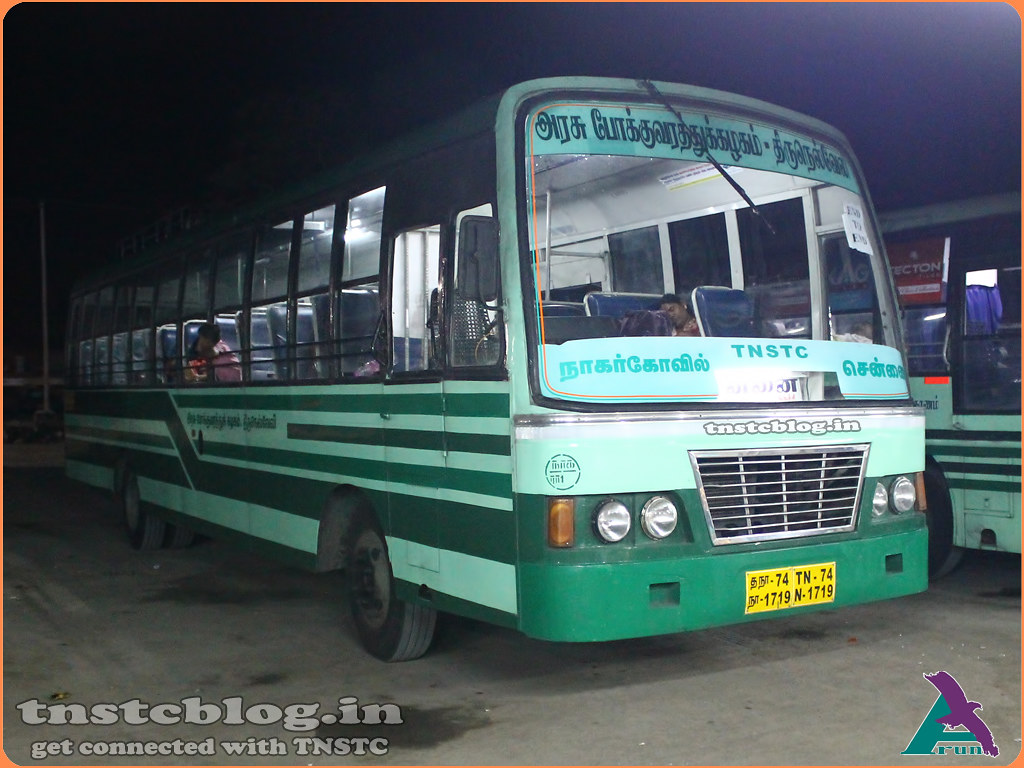 Driver changed happened and reached 04:40 A.M. at Tindivanam and dropped pax, continued journey and TN-21N-1782 which doing Chennai – Trichy from Chengelpet 2 Depot was competiting with us and lost the race and there was continous drop after Tindivanam drop a pax at Melmaruvathur at 05:05 A.M. Maduranthagam at 05:17 A.M. and crossed Chengalpattu at 05:40 A.M.

Reached tambaram at 06:00 A.M. and started to pass through cities after very long time coming into Chennai city most of the time in our Journey we will be in Bypass only, and on way dropped Pax at Guindy and enroute to CMBT., from tambaram Conductor came to the front door and helped pax to getdown with their luggages,he was so friendly to pax and from Tambaram again started our convo with conductor he was taking their difficulties in job and other social matters too he was very open and talkative, it was a great pleassure to talk with him.

06:40 A.M. the bus was sharp on C.M.B.T. entrance couldnt belive it a flat 8 hrs Journey from M.I.B.T to C.M.B.T. with enetering Trichy, Villupuram, Tindivam, and stoppages enroute over all a wonderfull Journey with TNSTC Tirunelveli. TNSTC tirunelveli should deploy more numbers of Ordinary fare buses to benefit the public the total journey was so smooth there was no hurry a slow and steady driving, highly recomended service for old people and womens who wants to travel safely for long distance.

After every pax got down at C.M.B.T. went with the crews inside Parking Bay and had friendly chat with them and showed about our blog and what we are doing to TNSTC, they were over joyed and respond well nearly half an hr went like a minute with them and got intro’s of them, on that day Crews were Drivers : Mr.Saravanan and Mr.Santhanam Conductor : Mr.Subburaj he got best conductor award for three times, started his work in MTC and now with TNSTC Nagercoil and it was a over excited journey for us , now some pics of the bus with crews we missed to click them properly with Bus. In this pic Sree from Team TNSTC Blog chatting with crews and Driver Saravanan is missing, next time will try to click them properly. 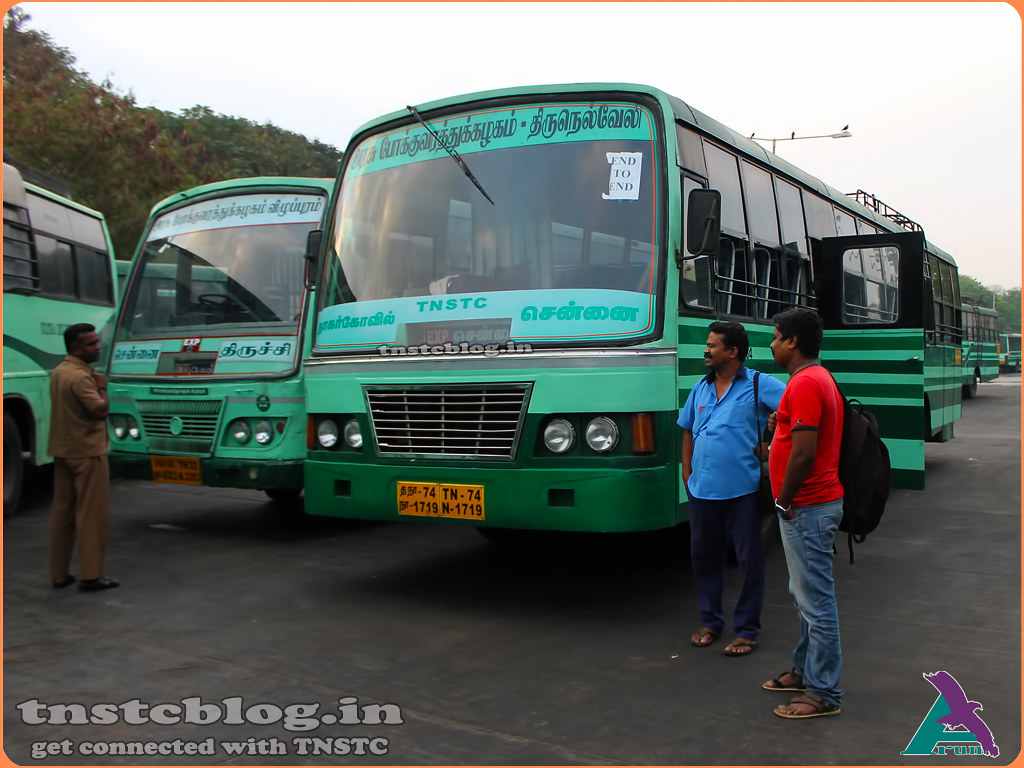