Tamil Nadu State Transport Corporation was the first in India to introduce Free Student pass, it is issued by the TamilNadu government for school going students from Standard I to XII everywhere by TNSTC, to benefit the students of villages specially to learn in nearby town schools and this pass is given throughout TN to all government / government recognized school students., In current 2014 – 2015 4+ Lakhs free passes have been issued to students. The school students get a pass to travel in the corporation buses at free of cost from their school to their homes. Permitted to travel in all Ordinary, Express and Deluxe services., School authorities to get the required application forms from the Head Office of MTC. Pass issuing agency will go to the schools for taking photos and issuing passes under on-line system. Passes after lamination are given to students in the schools themselves. A sum of Rs.15/- is collected from each student to meet the above procedural activities. Passes are issued from 15th of June to 30th of November every year. The validity period is from 15th June to 30th April.

50% concession tickets & students tokens given to Students of all the Arts & Science Colleges, recognized by the Government (except Self Financing Arts& Science Colleges),  Technical Institutions (I.T.I.s, polytechnic and Engineering Colleges) and Medical Colleges could travel in buses between residence and college. The evening college and Technical Education part time students are also eligible for concession tickets from their office to College and from College to residence, for visits to specific places such as library. Concession tickets are valued on Ordinary Fares Only. Permitted to travel in all Ordinary,Express and deluxe services only. 60 Exchange Tokens per month @ Rs.3.50/- per token. Issue of 50% Student Concession application forms, Registration and Issue of Point to Point card with tokens for the first month of every academic year is being done through the concerned educational institutions. For the subsequent months, Point to Point card and Tokens will be issued directly to the student

This travel pass is issued to Physically handicapped, Blind and Mentally retarded persons travelling with escorts recommended by District Rehabilitation Officer, The disability percentage shall be 40% and above and monthly income should not exceed Rs.12000/- and for blind persons there is no restriction on income, All blind persons having a disability percentage of 40% and above avail themselves of this pass without age limit., to travel with the identity card issued by Rehabilitation department, A copy of pass and identity card to be produced to the conductor it will be retained with him.

Freedom fighters and their legal heirs and participants in the language stir who are residents of operational area are eligible for free passes. Passes issued on production of freedom fighter pension certificate/financial assistance certificate issued by State / Central Government. Allowed to travel in all routes, Allowed to travel in all STU buses. If a cancer patient travels alone and produces a certificate from the hospital where he is treated , the conductor should collect ¼ of the journey ticket amount from the patient and should issue the actual journey ticket. The conductor will retain the certificate issued from the hospital.

Media persons are issued free passes to collect news from the villages and nearby places, the pass is issued by Transport Department after the approval of the Particular District PRO Public Relation Officer. The pass holder can travel with in the operational area of the corporation which issued the pass.

A Student Pass issued by DATC in 1997 between Maduravoyal and Thiruverkadu.

Pass preseved and shared by S.Arun, Thanks for the great Share. 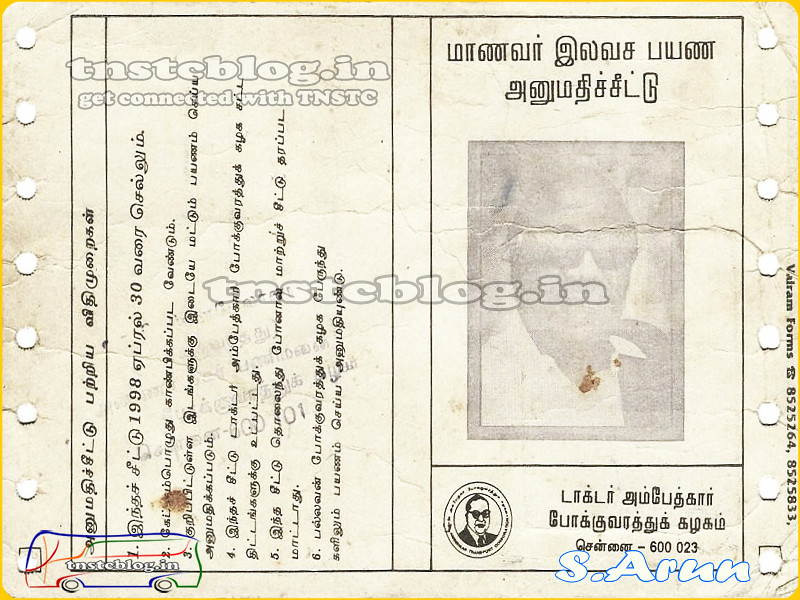 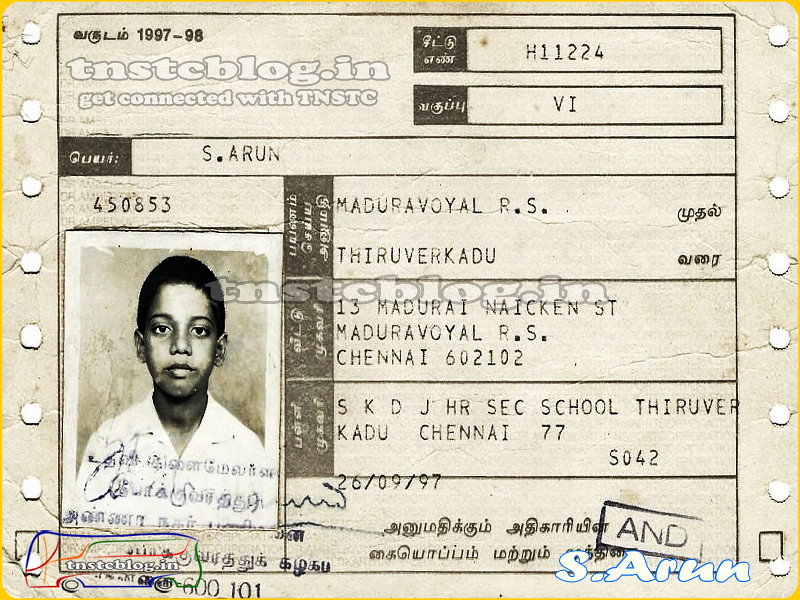 One thought on “Passes Issued By TNSTC”