News on TOI about our Blog 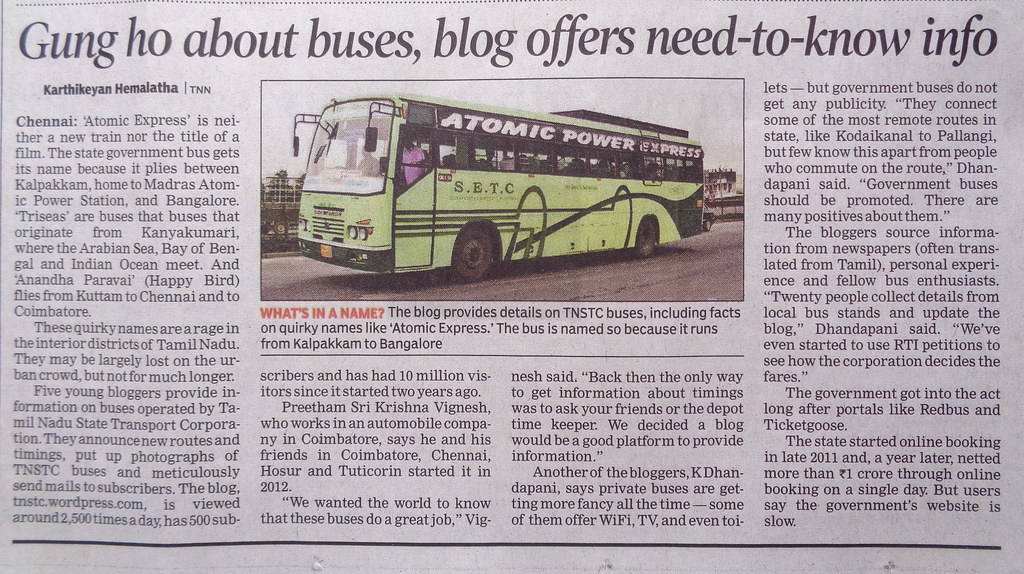 CHENNAI: ‘Atomic Express’ is neither a new train nor the title of a film. The state government bus gets its name because it plies between Kalpakkam, home to Madras Atomic Power Station, and Bangalore. ‘Triseas’ are buses that buses that originate from Kanyakumari, where the Arabian Sea, Bay of Bengal and Indian Ocean meet. And ‘Anandha Paravai’ (Happy Bird) flies from Kuttam to Chennai and to Coimbatore.

These quirky names are a rage in the interior districts of Tamil Nadu. They may be largely lost on the urban crowd, but not for much longer.

Five young bloggers provide information on buses operated by Tamil Nadu State Transport Corporation. They announce new routes and timings, put up photographs of TNSTC buses and meticulously send mails to subscribers. The blog, tnstc.wordpress.com, is viewed around 2,500 views a day, has 500 subscribers and has had 10 million visitors since it started two years ago.

Preetham Sri Krishna Vignesh, who works in an automobile company in Coimbatore, says he and his friends in Coimbatore, Chennai, Hosur and Tuticorin started the blog in 2012.

“We wanted the world to know that these buses do a great job,” Vignesh said. “Back then the only way to get information about timings was to ask your friends or the depot time keeper. We decided a blog would be a good platform to provide information.”

Another of the bloggers, K Dhandapani, says private buses are getting more fancy all the time – some of them offer WiFi, TV, comfortable seats and even toilets – but government buses do not get any publicity.

“They connect some of the most remote routes in state, like Kodaikanal to Pallangi, but few know this apart from people who commute on the route,” Dhandapani said. “Government buses should be promoted. There are so many positives about them.”

The bloggers source information from newspapers (often translated from Tamil), personal experience and fellow bus enthusiasts. “Twenty people collect details from local bus stands and update the blog,” Dhandapani said. “We’ve even started to use RTI petitions to see how the corporation decides the fares.”

The government got into the act long after portals like Redbus and Ticketgoose. The state started online booking in late 2011 and, a year later, netted more than Rs 1 crore through online booking on a single day.

But users say the government’s website is slow. “It’s not user-friendly like other portals,” said Arun Kumar, who books tickets frequently through tnstc.in.

5 thoughts on “News on TOI about our Blog”