Few days back, Arun told that he has spotted a 1.2.3 express of TNSTC-Salem in Madurai-Salem route.. I initially thought that was old Highway/Vaigai rider from TNSTC-Salem.. Surprisingly, it was a different one..

Madurai-Salem route is a completely four-laned stretch with Dindigul, Karur, Namakkal being the important places en-route. We didnt have a BPR type or the real express service in this route. Ordinary buses takes 5.30 hours and the so called express services takes 5 hours for the end to end journey. Tuty-Salem bus of Tuty puranagar depot remains the undisputed king in this route and i hope TNSTC-Salem will emerge as a winner with this new service. 🙂 I always prefer Nellai/Madurai region buses in this route and always had a feeling that TNSTC-Salem buses are much slower in this route. Recently TNSTC-Salem introduced 1 to 1(Non Stop), 3.33 hours in the important routes like Coimbatore-Salem, Bangalore-Salem etc., and i was waiting for them to start such a service in Madurai-Salem route.

Surprisingly, saw this 1.2.3 Non Stop 3.45 express while going to Palani on Wednesday. This guy has a stoppage only at Karur.. As per the stickering the running time is promised as 3.45 hours. I hope TNSTC-Salem will meet this and keep up their words.

First of all, Thanks to the TNSTC-Salem official who has thought about this.. I wish they start 2X2 SD services in their important routes as well.

Suggestion: Can TNSTC-Salem think of 3.33+3.45 express in Madurai-Salem-Bangalore route with a running time of 7.5 to 8 hours? 🙂

TN30 N 1314 of Meyyanur depot heading to Salem from Madurai as 3.45 Express with a stoppage at Karur. 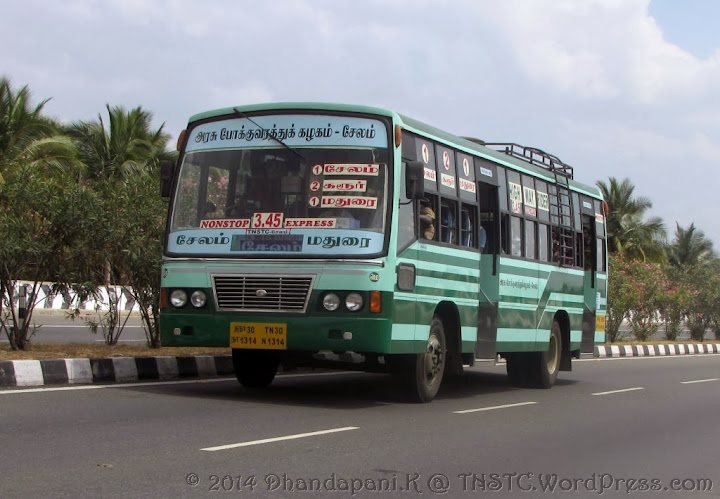