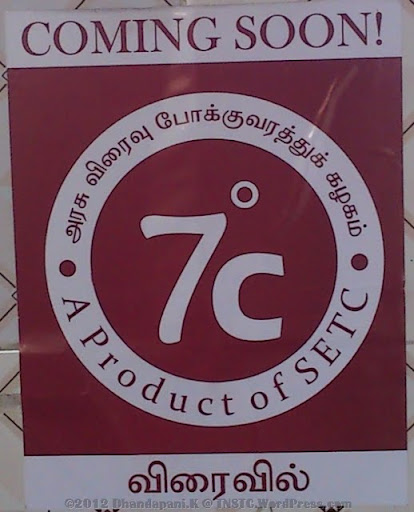 Been stumped by a sticker on an MTC bus with a legend ‘7 degrees C’? You are seeing an ad publicising the SETC’s latest service — delivery of couriers.

The transportation of letters and small parcels through State Express Transport Corporation (SETC) buses will commence before the end of this month. “A nominal charge of Rs.7 will be collected for sending postal covers and C stands for courier,” said an SETC official, explaining the campaign.

A letter or a parcel handed over to the SETC service will reach its destination in 12 hours and the recipient can collect it from the terminus after producing the necessary documentation, said the official. The cost of transporting parcels is yet to be decided though, the official added.

The service will be launched by Chief Minister Jayalalithaa. We have selected one firm for handling the courier service. We have been conducting a trial run for the past few weeks,” said SETC officials.

Last year, a similar service was introduced by the Coimbatore Transport Corporation on a pilot basis and it received a good response. “The corporation earned nearly Rs.26 lakh. After this, we decided to extend the service to other corporations too,” said the official.

“For us, passenger safety is of paramount importance,” said sources.

At present, the SETC has a total of 959 routes in which the courier service is expected to be introduced.

The SETC earns nearly Rs. 1 crore per day as revenue and this has witnessed an increase of 35 per cent when compared to previous years.
..