I was thinking to use the Madurai – Thirunelveli Bye Pass Riders right from the day when it was introduced. Didnt get a time for so long period. Also I was thinking to visit Nellayappar Temple. This saturday i was free a bit. So Just thought about this Trip to Nellai in the BPRs. Reached Mattuthavani around 7.15. Eventhough i roamed around MIBT many times, just spent some time inside MIBT to see the renovated platforms and checking the new buses from other divisions like Kumbakonam and Madurai. Saw the KeSRTC’s Super express service too.. Then went to the Nellai/Nagercoil platform. Just got the BPR waiting for me..

BPR had few stickerings like “Unvagam Nilla perundhu” meaning No stoppings at motels. Also the running time was mentioned as “3 hrs”. The BPR concept in this route was introduced by TNSTC-Nellai division and TNSTC-Madurai joined the brand BPR later. Now every half an hour we have a BPR serving the stretch. Boarded TN63 N 1378 bus of TNSTC-Thirunelveli. This particular bus was a transferred bus from TNSTC-Kumbakonam(Karaikudi region). I took the right hand side window seat in the last row. Advantage of taking this seat is, i can click pictures of highways through rear mirror and can also click vehicles running in the other lane.. 🙂 Around 85% of the road in Madurai-Nellai route is 4 laned, so no problem in sitting at last seat. 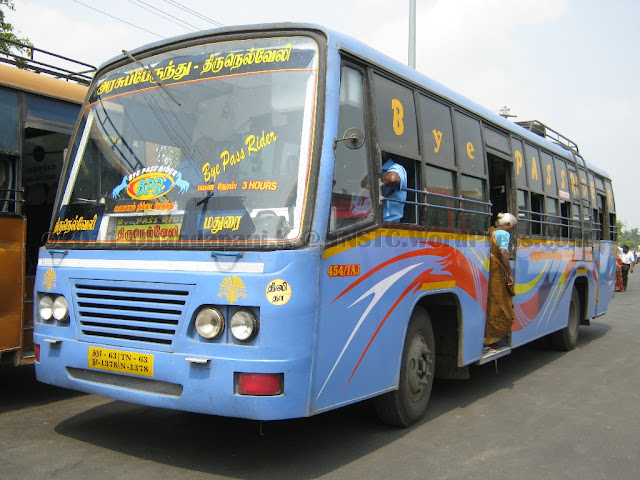 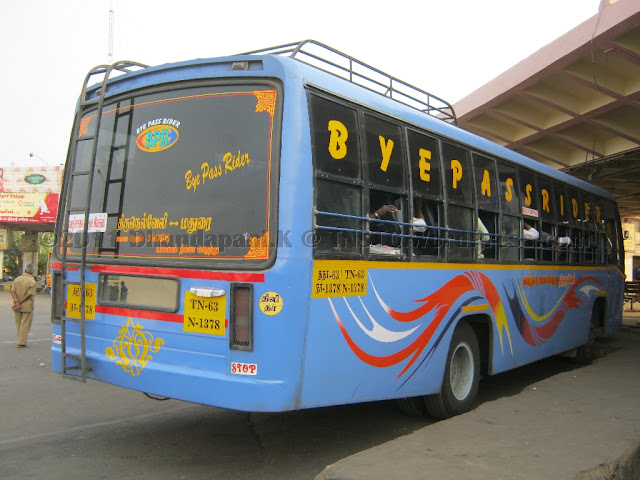 Reached Virudhunagar Bye pass road(Didnt Stop anyway!) 9 AM, Reached Sathur at 9.24 AM and stopped to drop a passenger. It stopped at sathur for few seconds in the bye pass road itself. Arrived at kovilpatti around 9.42 AM. Some passenger got down and few got inside the bus. It again started from Kovilpatti around 9.42 AM. Now im just nearing thirunelveli city. It took a diversion under the newly sellapandian bridge. It went inside the “Puravazhi salai” depot(@10.20 AM) to fill the fuel. It was standing there for 5 min. Finally it reached Thirunelveli New BS at 10.45 AM. It took exactly 2.45 hrs to clear the distance of 160+ KM. The fare for this BPR is Rs.70. Journey was worth!

Had a good darshan at nellaiappar temple before coming here. Also took the pictures of oldies at Nellai Jn Bus stand. Most of the city buses at nellai(including private) are oldies.

Return Journey to Madurai..
To reach Nellai i took a BPR from Nellai division. So i was thinking to take a TNSTC-Madurai BPR to reach madurai. A BPR TN58 N 1840 of Sipcot belonging to TNSTC-Madurai division was waiting to depart in another 15 min. Was bit unlucky that one person was sitting the right hand side window seat of last row. 😦

The bus started from New BS at 2.25 PM. I thought Madurai division bus will not give a stiff competition in terms of speed of Nellai division. Within few min after reaching North-South Highway i changed my mind. It reached Kovilpatti around 3.28 PM. Few people got inside the bus and it started from kovilpatti at 3.29 PM. 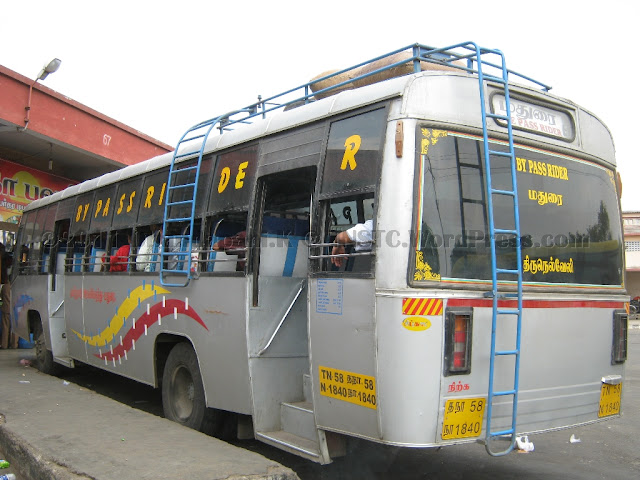 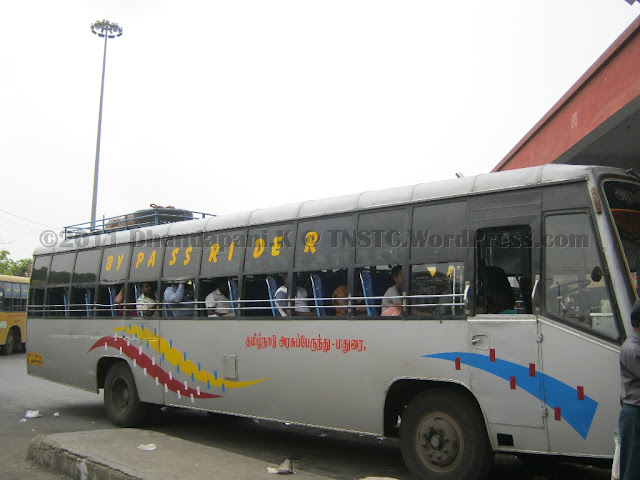 It also went inside a depot at 3.50 PM to fill fuel. This time it was Virudhunagar region’s Sathur depot. Depot was relatively small compared to “Puravazhi salai depot” which the former went. Again it started the journey at 3.55 PM. It overtook an SETC bus TN01 6895 which started 20 min earlier. 🙂 Reached Thirumangalam around 4.42 PM. Almost half of the bus was empty after thirumangalam. It reached MIBT around 5.20 PM. It took 10 min more than TNSTC-Nellai’s BPR. It took more time to cover the Madurai Ring road than the Nellai’s BPR. 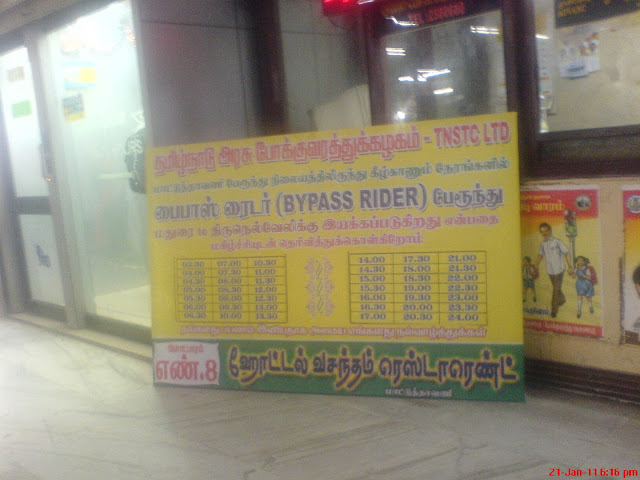 @Nellai. They mentioned that first starts at 3.00 AM and every one hour there is a bus. This might have changed after TNSTC-Madurai started its BPR.

BPR Concept
It is value for money. They can add Super deluxe services in this BPRs. Hope they will consider this. 🙂